5. What could possibly go wrong?

Aiming for herd immunity is a risky strategy with little to gain, but with serious possible consequences for healthcare and society.

The SARS-2 virus overstimulates and dysregulates the immune system. Repeated overstimulation might result in immune exhaustion. Some mention this as a putative risk due to frequently repeated vaccination, but it seems much more likely to result from repeated infections. This might ultimately lead to an immune system unresponsive towards SARS-2 infection, causing a new kind of potentially fatal disease after repeated infections.

SARS-2, like the seasonal coronaviruses causing the cold, has a lower R0 during summertime in temperate climates. This does not imply that nobody will be infected during the summer. This is illustrated by the infamous Dutch experiment “Dansen met Janssen” i.e., dancing the night after vaccination. Seasonal variation in R0 means that R0 will be lower in summer, and thus more likely to become below 1. R0 below 1 does not end the epidemic immediately, but only decreases in the relative number of new infections. However, if the numbers of infections are very high and the R0 is just under 1, the number of infections might be still high throughout the summer, causing many cases of disease in the summertime. The summers of 2020 and 2021 showed limited numbers of infections in Europe but started with a lower R0 and lower number of infections in spring. It is conceivable that decreasing R0 in the summer of 2022 will not lead to a very low level of infections in summertime.

Striving for many infections implicates a heavy load for all lines of healthcare: general practitioners, nurses, hospitals, and IC nurses. Inevitable this will prolong waiting lists in care, because healthcare professionals will prioritize acute threats over more chronic situations when doing triage. If the aim would be to deliver the almost the same level of healthcare, this amounts to relevant increase of care costs, that might become unaffordable.

Care is one of the major spendings of society, being about 10 to 20% of all the gross domestic product. In the first year of COVID-19 this spending increased from 10.2 to 11.2%, 10.2 to 12.8% and 17.6 to 19.7% in the Netherlands, UK and USA, respectively. This implies a relative 10 to 20% increase in one year due to the epidemic, with a reduced level of healthcare. Population aging leads to similar increases during 15 years where extra technology improved the level of healthcare.

Virus epidemiology is an exponential function and in a few days the number of infections could be doubled again. Knowing that infections precede hospitalizations by about three weeks, it is good to realizing that a lockdown starting a week late could cause a fourfold overload in hospitals. Aiming at full house hospitals, risks overloading hospitals.

The Omicron variant is milder than the Delta variant, but not compared to its immediate predecessor. Omciron causes different pathology compared to Delta e.g., more often a sore throat and less often loss of taste and smell. Being milder should not be confused with being mild as the fatality rates in Denmark are showing at uncontrolled epidemics with exponential increase (Figure 17). 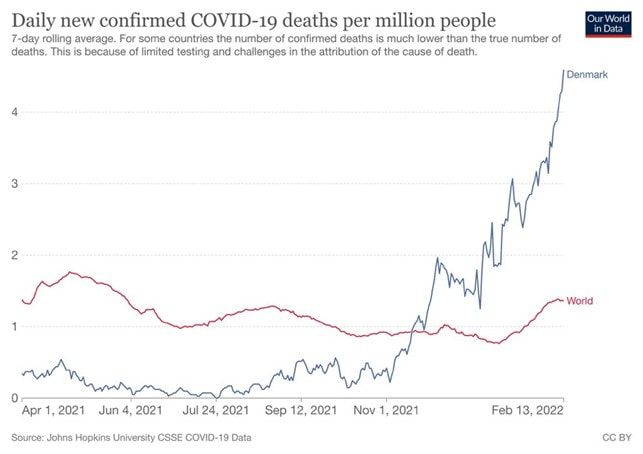 High virus circulation is the perfect strategy to generate new variants. In contrast to the popular believe, a recent HIV study underscored again that serious viruses could yield even more pathogenic variants.

The Omicron BA.2 variant is more transmissible than BA.1, and that it also possesses immune-evasive properties that further reduce the protective effect of vaccination against infection.

Evolution is slow with mutations but fast with recombination. Of course viruses do not have sex, but in biology, sex is the major mechanism of recombination. Coronaviruses are a rare exception among RNA viruses that do not mutate frequently due to a special RNA polymerase. In practice they use this as an advantage for more recombination.

The innate immune system produces type I Interferons after infection, which alert cells and the immune system against virus infections. This gives the second virus a disadvantage over the first one, preventing most double infections. Coronaviruses inhibit type I interferons, thus allowing other viruses to infect the same host. The immune dysregulation and overstimulation could lead to multiple coinfections, three, four or five viruses at the same time in the same cell. This is the ideal place for genetic recombination, known from interactions between individuals of higher species, where it is dubbed sex.

Although Deltracron was a lab artefact and not a recombination variant, this does not exclude the possibility or minimize the likelihood that such a variant might arise.* Recombination, or the invention of sex, has speed up evolution drastically over accumulation of mutations. High recombination frequencies make coronaviruses more successful in jumping species and causing new diseases.

A serotype is an immunological defined group of viruses where immune protection is generally limited to the same serotype i.e., neutralized by the same serum antibodies.

Just like Delta following immediately after Omicron BA1 variant, the BA2 variant is the next to become dominant in South Africa and Denmark. This illustrates that if one variant passes by, the next one will come. Which variant that will be might depend on infectivity of the strains and relative immune protection in the population. We must stop the virus, not hope for milder variants, since variants might even become more pathogenic.

New variants can occur from different lineages of SARS-2 e.g., Alpha and Beta followed by Delta followed by Omicron to illustrate that the virus variants tend to go wider apart (Figure 18). Eventually, new variants would arise that should be regarded as different serotypes, since immunological cross-protection is too limited to offer relevant immune protection. Technical that variant could be regarded as SARS-3. 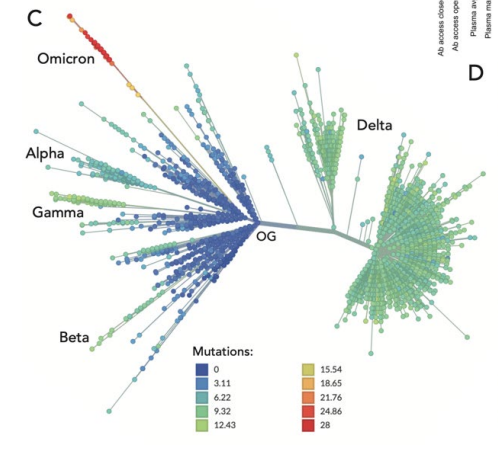