Nederlands
The world was surprised by SARS-2 by the turn of 2020, vaccination was started at the end of the year, but the same problems are faced at the dawn of 2022. While some countries are giving a second booster vaccine, vaccination only is not going to stop this epidemic. As with other coronaviruses, immunity against SARS-2 is not sterilizing [Kikkert] and short lasting.[Edridge]

Protection from epidemic diseases is a human right, all states are obliged to protect their inhabitants (Figure 1). “Some have portrayed fighting Covid as a health versus economy issue, but it’s not. It’s both. It is impossible to have a functional economy in the middle of an uncontrolled, high transmission pandemic that causes illness, time off work & hospitalizations.”[T] Several studies showed that COVID-19 elimination, not mitigation, creates best outcome for health, economy, and civil liberties  [FT; Oliu-Barton; Wu]

Tedros (WHO) said “2021 was a year in which we lost 3.5 million people to COVID19 – more deaths than from HIV, malaria and tuberculosis combined in 2020”, "And still, COVID-19 continues to claim around 50 thousand lives every week."

Most countries suffer from a huge excess mortality due to COVID-19 with over 1 death per 1000 people per year (Figure 2; Figure 8 in Section 14). Excess mortality is not limited to the elderly, SARS-2 is an important cause of death in all age-groups, including children in Western countries (Figure 3; Figure 9).

Similar to the common cold viruses reinfection does not appear to be milder even after 35 years,[Edridge] and evolutionary pressure might select for more pathogenic variants.[JJ] SARS-2-induced morbidity seems to be even more severe in quality-adjusted life years (QALYs) lost than its mortality.[JJ] Western countries need lockdowns to rescue healthcare from a meltdown due to the exponential growth of COVID-19 .cases. In a nutshell the epidemic is too huge to control and to severe to let it go (Figure 7).

Yet this epidemic causes far less mortality and morbidity in the region where it started compared to the Western world. Has we forgotten how to control epidemics, though we’ve set the example in 20th century?

Figure 2. Excess mortality in various regions of the world, related to 18 months of COVID-19. Min and max of countries are shown. For country-specific details and sources see Figure 8 (Addendum will be made).

Figure 3. COVID is the number one natural cause of death for children in the United States.[Travis;T]

Being passionate on fighting diseases, I started my career in virology. After graduating in virus detection, I learnt about epidemics and worked in vaccine technology. Europe had almost no severe human epidemics anymore, and most of my virology was in veterinary medicine. My PhD and postdoctoral recognition were in immunology. Later I switched to medical data science to work on personalized medicine. Remembering lessons learnt from my early virological experiences, I was shocked to hear about the unprecedented approach to aim for herd immunity through natural infections.[JJ] This was voiced by many experts from various countries.[JJ]

Viruses and some other pathogens spread from infected person to another and should be fought different from infections in food and water, as most bacteria do. In general, the infected person is healthy, since most viruses, including coronaviruses, spread primarily before they cause illness. Controlling an virus epidemic implies avoiding the spread of the virus in the population, the earlier, the better and the easier. It is unwise to wait with controlling an epidemic, since if a pathogen becomes high endemic (many infections in population), stronger and longer measures are required to control it.

An epidemic can be compared to a fire, while it is child’s play to stop a burning piece of paper, a forest on fire will overwhelm multiple units of firefighters. Some epidemics come and go since they end by herd immunity, but this has never been shown for any epidemic of human coronaviruses.

The experimental strategy to let the virus spread deliberately by mitigation [Walensky] caused high excess mortality. Similar mortality rates occurred in countries that were unable to respond well to the epidemic. As any data scientist knows, exponential increasing functions will always be uncontrollable and drown the healthcare system. The strategy preached to obtain herd immunity is to have and maintain a high incidence of infection. This correlates with high mortality rates in the first year, and these correlate with high rates in the second year.[JJ]

5.Coronaviruses do not fade out.

Do coronavirus epidemics ever stop? The epidemics of SARS and MERS were stopped within a year by test, trace and isolate, or if needed by a lockdown. In the region of origin, the same strategy was applied successfully against SARS-2. The four coronaviruses that cause common cold never yielded herd immunity in 35 years, but probably ages longer.[Edridge] These coronaviruses did not even become milder with the 30th infection compared to the first – immunity just wanes within a year over and over again.

SARS-2 differs in pathology from the common cold viruses, it infects many tissues, leading to damage of the brain, the immune systems, the lungs, the cardiovascular system and other organs.[JJ]

Immunity against coronavirus sharply contrasts with immunity against influenza that seems to last a lifetime.[Altschuler; Yu] After an epidemic, the old serotype of influenza will disappear, and new variants will arise. The difference might reside in the superantigen found in coronaviruses, that deletes T-cell immunity [Gagne; Li], and deregulates the immune system.[JJ] SARS-2 superantigen [Cheng] is associated with the multisystemic inflammation [Kouo; Scaglioni] and virus persistence with long covid.[Jacobs]

6.How to stop the epidemic?

Medical symptoms are crucial in care but poor in detecting even the most infectious persons. People without symptoms have on average more virus than those with (severe) disease (Figure 4). When corrected for age, hospitalized patients (blue line) might have 10-fold less virus compared to otherwise healthy infected persons. Most symptoms from SARS-2, sneezing, coughing, headaches and fever, are generic to many other diseases including common cold and allergies. So not only the false-negative number, infected without symptoms (asymptomatic, presymptomatic), also the number of false-positives, symptoms without infections, can be high. 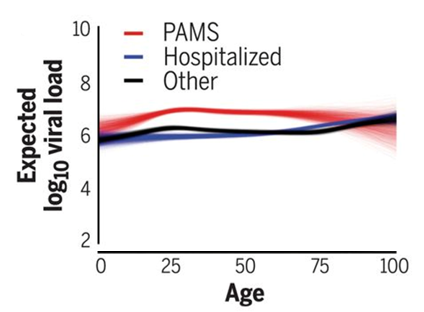 Figure 4. Logarithmic virus titers in patients, with (almost) no symptoms (PAMS -red), at home with COVID-19 (other -black) and hospitalized with COVID-19 (blue). [Jones]

Clinical symptoms fail to discriminate infected people, or technically phrased, have insufficient sensitivity and specificity to serve as an effective test method.[JJ] Testing has been shown invaluable in stopping human-to-human transmission for infectious diseases e.g., HIV and tuberculosis. Mycobacterium tuberculosis is a bacteria but spreads from human-to human, in contrast to most other bacteria.

Not all tests are equally sensitive, but virus titers increase rapidly in time in infected persons.(Figure 5) Thus repeated testing and testing just prior to being in contact with other people is crucial in detecting infectious people. The lower sensitivity of rapid tests, might miss infection about ½ a day before the peak about 1 week after the peak, compared to RT-PCR. Higher virus titers are associated with more virus transmission, especially in people that do not take precautions e.g., due to the lack of symptoms or perceived risk for others. Rapid tests are very likely to detect superspreaders. They can be used efficiently in daily settings e.g., for people who at places where contact cannot be avoided.

Sensitive assays, like RT-PCR, are invaluable in contact and source tracing of infections, especially in populations with low virus incidence to decrease the virus incidence even further, without too much impact on society.[JJ]
Different from our individualistic society, testing is typically done to protect other people and not ourselves i.e., who tests positive is already infected. Many countries do not support those that quarantine, which would have been a nice reciprocal gesture. 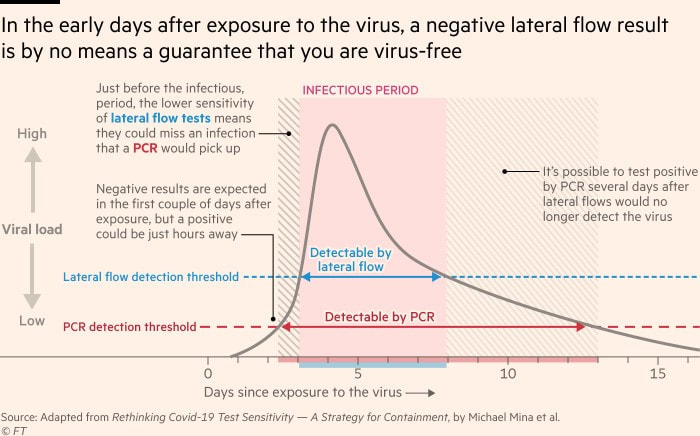 A complete lockdown i.e., keeping everyone all the time at home, has a severe impact on society. Most isolation methods are incomplete and aim to lower the chance of virus transmission. Most important practical measures are:

With the exception of the undesired complete lockdown, every measure against the epidemic falls short. Often Swiss cheese model is used to illustrate the stacking of various anti-epidemic measures (Figure 6). Each measure decreases the R0, and taken together, they may reduce transmission to below 1. When R0 is a sufficient far for a sufficient time below 1 the epidemic will resolve.

Default transmission might differ in temperate regions between summer and winter seasons, so depending on the season more or less measures are needed to control the virus.

Depending on the number of infections in the populations, the amount of people gathering together and the vulnerability of these, different combinations of test-based and generic lockdown strategies could be used. The long-term strategy should always be to keep the numbers as low as possible, and act early with a decisive lockdown if other measures are insufficient to control the number of infections, and trace every case. 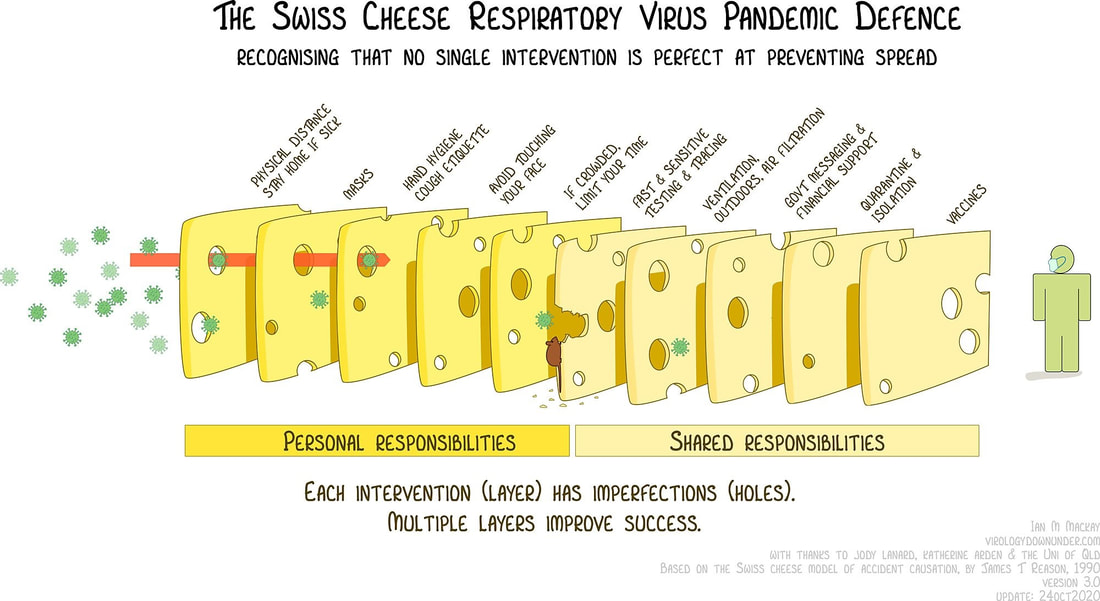 Some people say we cannot control this epidemic, mostly referring to the failure of incomplete lockdowns to rapidly reverse the practice for deliberate spreading the virus.[Section 4] But even in this harder situation, we could stop the virus from drowning our healthcare systems. Our healthcare system will drown if we ignore the virus.

East-Asia and Australia showed that coronavirus epidemics could be stopped early on, with the best outcomes for health, economy, and civil liberties.[FT; Oliu-Barton; Wu] Western history showed we could strive to zero a century ago with tuberculosis, when its impact was similar than COVID-19 was.[JJ] Several differences exists between these two epidemics but they do not indicate we could not repeat this. Firstly, tuberculosis raged for centuries, not just years. Secondly, technology for testing and tracing were still primitive and time consuming, making up for the difference in transmission time. Both airway pathogens are endemic with high frequencies in the winter and low frequencies in the summer. Low circulation in the summer, might be ideal to start test, trace and isolate to keep numbers low.[JJ] SARS-2 has become endemic, Just like tuberculosis, which means it does not need to introduced in the population, as it already circulates in it.

As long as we don’t stop this epidemic, the epidemic will rage and the virus may even evolve to more dangerous variants by recombination.[JJ] If we act and fail partially, we might decrease the time and severity of our winter lockdown, together with a relevant decrease in mortality and morbidity, less freedom restriction and minimal economic damage. So even failing is closer to the desired situation than doing nothing but keeping the status quo to build up (herd) immunity in the population.

I’m very well aware that we could wait a few centuries, as we did with tuberculosis, but I pray that we will act sooner to limit the impact of this epidemic.
Epidemic Control Addendum
John. J.L. Jacobs. 28.12.2021