Vaccination is the best personal protection against disease.[JJ] Against SARS-2 a variety of novel vaccines are developed,[JJ] which are safe and effective.[JJ]

Vaccines lower the chance of having COVID-19, but offer no additional protection against long COVID, COVID-19, after have symptomatic disease,[JJ] in the first place. But for those who do experience a breakthrough infection, studies suggest that vaccination might only halve the risk of long COVID — or have no effect on it at all1,2. Countries with high infection rates could still end up with many cases of long COVID, even if nations have high rates of vaccination.[Ledford]

Vaccinating adolescents and children significantly reduces covid-19 morbidity and mortality across all ages.[Shiri] Vaccination protects strongly against disease, even though this protection wanes over time, from 95% to 80%, in the first to sixth or nine month, respectively, depending on the vaccine (Figure 1). Practice in the Netherlands shows about a 7-fold reduction for ICU admission due to vaccination.[T]

Figure 2. Vaccination protects from disease and even more from lethality.[Ding] 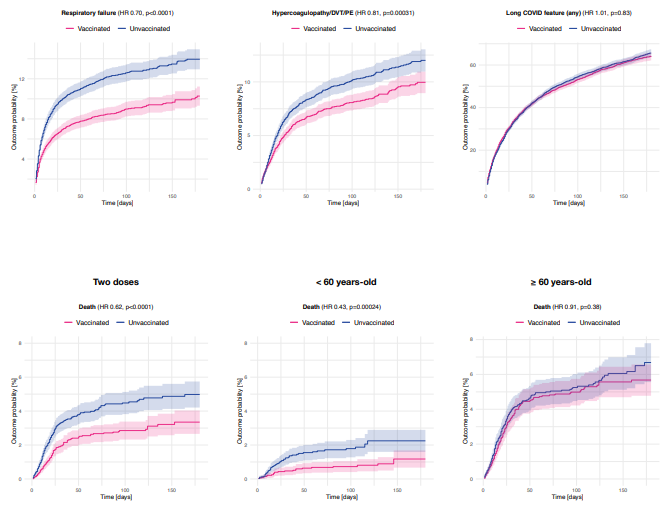 Coronaviruses are extremely unlikely to cause herd immunity as virologists already knew before the pandemic. Herd immunity depends on lasting sterilizing immunity but airway RNA viruses including coronaviruses, don’t induce sterilizing immunity i.e., immunity against infection.[Kikkert] A short time induction of mucosal antibodies (Immunoglobulin A; IgA), may offer some temporary protection against infection.[JJ] However, not all people have IgA responses and if they do, these are short-lived, disappearing after 3 months.[Sherina, Nordström] At the end of 2020, it was shown that no herd immunity was observed in Manaus, although a sufficient fraction of the population should have been immune.[Buss, Prowse, Tailor]

Immunity, and especially sterilizing immunity, wanes rapidly after infection or vaccination with SARS-2, similar to other coronaviruses.

No sterilizing immunity
Immunity from infection (sterilizing immunity) is different from immunity from disease (protective immunity).[JJ] About 75% of the patients produce for a few months a special antibody, IgA.[Paces] IgA protects against respiratory virus transmission. [Seibert, Saif] In the first two or three months after vaccination, people have some protection against infection but this wanes rapidly.

Mucosal antibodies protect from infection (nose, mouth, higher airways, gastro-intestinal tract), but serious disease is associated with infection that enters the blood circulation.[JJ] Respiratory viruses differ from most viruses that they don’t have an early viremic passage and thus avoid neutralization by immunity in blood. Virus transmission occurs directly from infected mucosa by small droplets (aerosols) in breathing-induced airflow. The highest virus load is observed in people 1 to 3 days before the onset of symptoms.[Jones] After vaccination with mRNA vaccines, protection against infection wanes from 70% to 50%, after 6 months, after which protection cannot be reliably detected. The DNA vector vaccine has no significant effectivity left, 4 months after vaccination. [Nordström] Data from the UK show that infections are rarely less common in vaccinated compared to unvaccinated people.

No lasting immunity
T-lymphocytes might be more important than antibodies in protecting against COVID-19,[Swadling] so antibody data should always be verified with immune protection data. Protective immunity after infection with coronaviruses is short lasting, reinfection occurs within one year.[Edridge] Also after vaccination, protective immunity wanes.[Goldberg] After vaccination with mRNA vaccines, protection against infection wanes from ~9% to ~50%, after 6 months, after which protection cannot be reliably detected. The DNA vector vaccine has no significant effectivity left, 4 months after vaccination (Figure 1). Protection against severe Covid-19, effectiveness waned from 89% in the first month to 42% after 6 months. Vaccine effectiveness was lower and waned faster among men, elderly, and people with comorbidities.[Nordström]

High levels of protection (over 90%) are also seen against mortality with all 3 vaccines and against both the Alpha and Delta variants. Relatively limited waning of protection against mortality is seen over a period of at least 5 months (Figure 4).[UK] It should be noted that reinfections occur more often than breakthrough infection,[Bozio] thus vaccination protects better from (re)infection than being recovered from an infection. Data show waning of antibody responses and T cell immunity to SARS-2, suggesting a 3rd booster immunization might be warranted to enhance the antibody titers and T cell responses in the early vaccinated, especially the elderly and those with comorbidities.[Suthar]
The waning of immunity is used to argument the date limit of the validity of COVID-19 inoculations for travel purposes to 9 months.[EC] 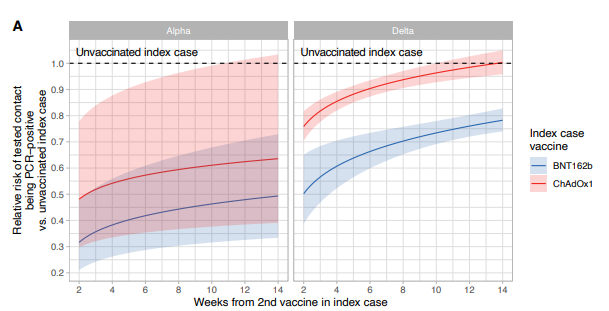 Figure 4. Protection against infection by Alpha and Delta variant in weeks after vaccination with a DNA vector vaccine (red) or an mRNAvaccine (blue).. 1 indicates, no protection. The shaded areas indicate the 95% confidence interval. Please note that the scale is in weeks, 13 weeks = 3 months, still a short time window after vaccination. [Eyre]

Almost all respiratory viruses (pneumoviruses, rhinoviruses, adenoviruses, influenza viruses, coronaviruses) spread through contact, droplets and aerosols, It has been shown for MERS and SARS-1 but not formally investigated for common cold.[Kutter] 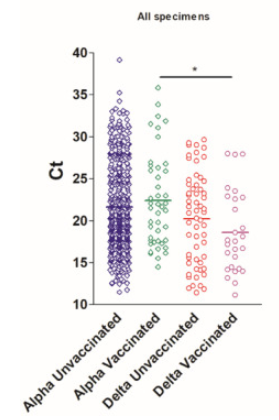 Figure 5. Virus titers after (break-through) infections in vaccinated and unvaccinated people after infection with Alpha or Delta variant. [Luo]

But we know that natural reinfections occurred for all seasonal coronaviruses at 6 and 9 months but most frequently within a year.[Edridge] Protection from disease by antibodies (IgG) and T-cells in blood lasts longer after infection or vaccination, although these responses decrease after a ½ year, although this is debated.[JJ] More important than antibodies and T-cells is protection from disease.

Symptomatic SARS-2 reinfection was observed within the first six months of the epidemic [Nachmias]. but vaccines still offer relevant protection against disease by Beta and Delta variants. [Chia] Probably 23% of the infections in Manaus were reinfections [Prete] In Iran many provinces have an infection rate of more than 100% i.e., showing that people have become infected more than once at a population level.[Ghafari] No decrease in SARS-2-related mortality was observed in Iran,[W] which is similar to the observations most people have with the seasonal common cold.

How could immunity wane so fast? We know this from some bacterial superantigens. Superantigens induce strong immune responses that do not last.[Stow] SARS-2 has a superantigen motif.[Cheng, Brown] Superantigens could be the cause of the virus-immune pathology observed in COVID-19 [Huang, Giamarellos-Bourboulis](see II). It could also induce multisystem inflammatory syndrome in adults and children [Kouo, Rivas]. Superantigens could also link SARS-2 to persistent infection [Jacobs21] and autoimmunity.[Getts]

Seasonal respiratory infections, like SARS-2, occur mostly in the winter in in temperate areas. Probably this is related to a variety of factors affecting the virus stability, transmission and sensitivity to infection e.g., vitamin D status, closer proximity during indoor contacts, altered humidity and lower temperature. Epidemic outbreaks can occur during the summer, as the infamous Dutch experiment “Dancing with Janssen (vaccine)” showed, and also seen at some large outdoor events like European soccer games or other meetings.

Virus epidemics follow exponential growth which might overpower the healthcare system. In countries, like the Netherlands, that fail to contain the SARS-2 epidemic, specialized care, such as that for heart patients, transplantation and trauma, is seriously suffering from the corona pandemic. Influenza epidemics end due to lasting herd immunity, and new viral serotypes arise that start new epidemics. In contrast to influenza epidemics, corona epidemics, do not resolve themselves, for several generations we have the same four serotypes of common cold.

The impact of SARS-2 could be reduced at different levels: (1) minimize the epidemiological spread, (2) lockdown society, and (3) improve medical treatment.[JJ] Epidemiological and medical control are two different but complementary ways to reduce the impact.[JJ] (see IV) It has been known since at least the 1980 that coronavirus titers do not correlate with disease severity. In contrast, when disease starts, virus titers decrease, and virus titers are low in the upper airways during severe disease. Disease is related to virus immune pathology.[Jacobs20] The amount of virus is related to the risk of infecting someone.

Unless people can time travel, testing after symptoms occur is of very limited use in preventing new infections. Epidemiological testing should be done before meeting multiple or vulnerable people, or in contact tracing.[JJ]

Vaccinated or cured reduces the risk of personal disease upon infection, and tested implies that someone has no detectable virus load. Therefore some advocate a double G strategy is used, people should be both: tested as well as vaccinated (and cured).
Sometimes a different rule is followed, people should be symptom free but this might be less informative. People being symptom free, might still have the highest virus load. This has been known from other coronaviruses,[JJ] and shown for SARS-2.[Jones] Being infected without symptoms is hard to understand,[JJ] as illustrated by the prime minister of the Netherlands, stating the rule is that one should be tested when have symptoms.[DDS]

No testing strategy has a worse predictive power than a symptom-only based policy, since many SARS-2 symptoms are similar to generic diseases and allergies, and, more importantly, the most infectious people are missed since these might be symptom free.
Which policy to choose between 1G, 2G and 3G results in severe political discussion. Some political parties, like the ChristenUnie in the Netherlands aim for testing (1G) everyone, since they value the liberty of people who do not want to be vaccinated.[Trouw]
From an epidemiological point of view, testing only will have clearly less false negatives than vaccination only but double protection, being vaccinated and tested would be best. This even holds true for rapids tests, which are less sensitive than RT-PCR.[JJ] Nevertheless, any rapid test will correctly identify the most infectious people. Since virus titers might rapidly increase, testing at location just prior admittance offers some epidemiological advantages.[Trouw] The great value of testing everyone at admittance is that it will detect pre- and asymptomatic people with high virus loads.[T]

In Austria and the Netherlands, some major leading parties want a 2G policy, one has to be vaccinated or cured or go in lockdown. For multiple reasons, including science and public opinion, I do not favor such a policy.[JJ] People who feared to be locked out of society due to having personal or conspiracy-theory related objections against vaccination, have themselves deliberately infected with the virus.[NOS] In this way 2G policy will have the reversed from desired result.

Some politicians suggest to reduce virus transmission, since its policies are much easier to implement than identifying people by testing and a lockdown. However, vaccination has a very limited epidemiological efficacy, since vaccines do not prevent nasal SARS-CoV-2 infection and transmission.[Bleier] Early after vaccination i.e. less than 3 months, it has a small effect against infection, it reduces household infections by ⅓.[Singanayagam] After 3 months the IgA titers, protecting against infections, drop below the threshold.[Melgoza-González]. Immunity against infection persists longer, due to IgG antibodies and T-cells in blood. Similar results were found earlier after infection.[Sherina]

Someone asked me why the numbers of influenza were so low, implying the conspiracy thought that COVID are masking up flue mortality. I was puzzled, since I thought it would be obvious that everyone would understand that the generic antivirus spread measures e.g., keeping distance, facemasks and ventilation, are also effective against influenza.

All countries that have vaccinated the whole population illustrate that the after a few months the number of infections are still high again: vaccination is insufficient to protect from infection, even though it protects very well against disease. This is also the Achilles’ heel of vaccination-based entrance: vaccinated people can still be infected and spread the virus. Stigmatizing the unvaccinated is not justified. To claim that “the unvaccinated threaten the vaccinated for COVID-19” is far too simple. [Kampf] (Figure 6) 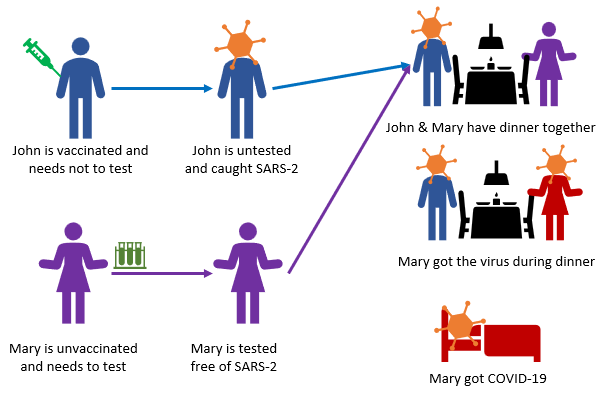 Figure 6. Transmission between a vaccinated and an unvaccinated person in the 3G-entrance policy allowing vaccinated, cured and tested to socialize.
John. J.L. Jacobs. 30.11.2021