I am moving my English blogs on COVID-19 and ORTEC to this site.
Nederlandse blogs over COVID-19
Two years COVID-19:Looking back and forward

The SARS-2 epidemic decreased the average life expectancy that had increased for 15 years in all Western countries, and even 40 years in some. In November 2021, 80 countries had a population mortality rate of over 0.1% (1 / 1.000) due to COVID-19 [WOM], in many Western countries, like the Netherlands this was about 0.2%,[Zelst] only Germany was at 0.1%. If 10% was infected 0.1% implies a 1% infection-mortality ratio. Death toll varies more than 100 fold between countries (Figure 1).

The number of cases differ strongly between countries, presumably due to different definitions and recording strategies of cases. It should be noted that not all countries provide reliable data on mortality e.g. the Netherlands report officially 11.500 corona-related deaths in 2020, whereas the national statistics reported over 20.000 deaths.[VG, RTL] The current number of 19,217deaths[WOM] is thus also likely due to underreporting by the RIVM. The real number is over 35,161,[Zelst]. Remarkably, the underreporting of Covid-related deaths in the Netherlands seems to increase from 72% in August 2020 [JJ] to 76% at the end of 2020 to 83% in November 2021. Moreover the world-wide number of reported deaths were under 2 million and over 5 million in 2021, 90% higher.[1][WOM] Also the demographics differ strongly per country, so the change in life expectancy provides a better overview of the impact of the epidemic.

The real impact of the epidemic is shown by the change in life expectancy, which has been growing in many countries for 40 years. Between 2005 and 2019, life expectancy increased in 37 upper-middle and high income countries or regions with reliable and complete mortality data. In 2020, the SARS-CoV-2 (SARS-2) epidemic broke out with different strategies in these countries. Only 3/37 countries - New Zealand, Taiwan, and Norway – had a gain in life expectancy, and 3 others - Denmark, Iceland, and South Korea - showed no difference (Figure 2). In the remaining 31 countries, more than 222 million years of life were lost in 2020, which is 28 million more than expected. In four countries (Russia, Bulgaria, Lithuania, and the USA), also considerable excess mortality in people younger than 65 years could be shown. [Islam]

Similar effects on mortality were found in India [Vasishtha]. Globally, 9-10% of the population have antibodies due to infection with SARS-2, with major regional differences e.g., 1.6% and 23% in Eastern and South-eastern Asia, and Central and Southern Asia, respectively.[Rostami]

In the Netherlands, the number of cases is titrated on the hospital which will nullify the efficacy of vaccination on population mortality (Figure 3) (see 5) The relative increase in mortality is in all age groups, 0 to 65, 65 to 80 and 80+.[CBS] In the first year, the COVID-19 epidemic costed more than one year of average life expectancy in most countries, which took 15 years to build up.[Heuveline] This illustrates both that SARS-2 is a severe epidemic in terms of mortality, and that national policies matter and debate can improve them.

In Eastern and South-Eastern Asia, where the epidemic started, it is over and the economy in 2020 kept growing. This illustrates that fighting the virus is good for the economy, for those who are not convinced by the the argument of saving lives.[FT] 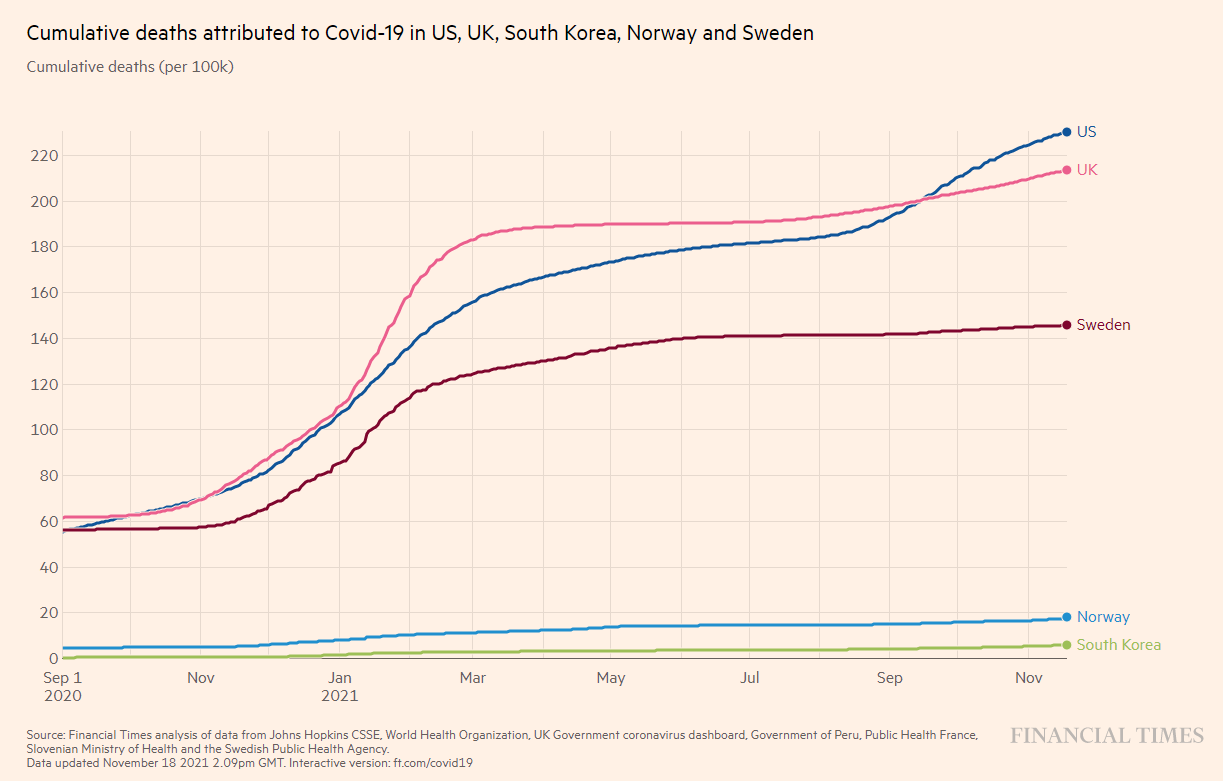 Figure 1. Comparing death rates in a few countries with different policies. In the link other countries could be added. When comparing other countries, please read the text for examples and also note that FT states “Governments’ stark daily figures on the spread of coronavirus are difficult to compare across countries, and may be significant undercounts.”[FT Visual] 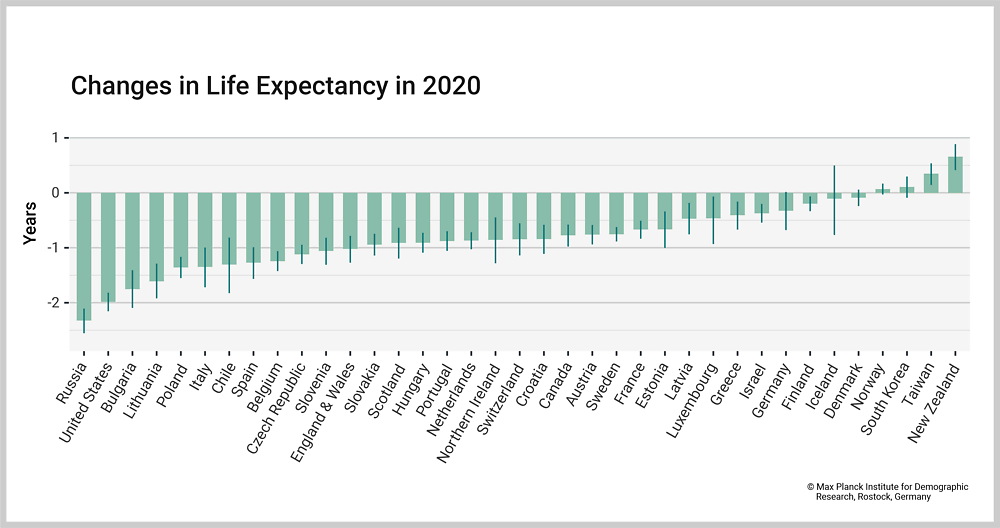 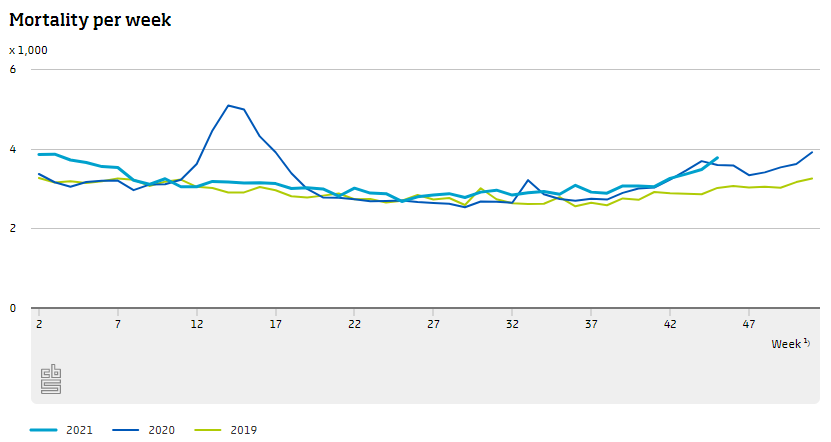 The WHO has stressed from the beginning that countries should limit virus spreading by testing, testing and testing. Some countries, like the US and Sweden, did not take this seriously for unclear reasons. The Netherlands argued falsely that they could not test but this was easily refuted.[JJ] Moreover, the UK and the Netherlands [NOS], opted for herd immunity through natural infection [Youtube]. The WHO has warned that this is both unethical and unscientific. If herd immunity arises, it arises as a consequence of failing measurements and it should never be a deliberate aim to have as many people as possible with a pathogenic virus.

In the Netherlands, there is no transparent debate on how to fight the epidemic.  In the first year of the epidemic, the Red Team, a diverse team of relevant expertise and field experience from previous epi- and pandemics in the Netherlands, Africa and Asia (SARS, Ebola, HIV/AIDS), offered a different vision. After a year, the Red Team announced by public letter that it would no longer advice since the cabinet had opted for a different strategy. Later they stopped completely for the same reason. The cabinet wants to maximize virus spreading within limits of hospital/ICU capacity in order to increase population immunity to reach the herd immunity threshold. The red Team wants to minimize virus spread, disease, complications and mortality.[Mooy] Obviously, both strategies are incompatible with each other.
The 7th human coronavirus, SARS-2, causes the COVID-19 epidemic, [JJ] so we cannot say it is all new. COVID-19 is the 68th epidemic in the 21st century,[JJ] and the world has plenty of experiences in handling viruses, both in general and corona-specific epidemics. Some countries, like the six that do fairly well, have learnt from this, others still have their challenges.

Before SARS-2, two highly pathogenic coronaviruses, SARS and MERS, infected thousands of people in a short time window. Billions of people have been infected with the four other coronaviruses for generations i.e., known as the common cold viruses. These experiences tell us that epidemics don’t resolve themselves and that coronaviruses keep reinfecting people.
John. J.L. Jacobs. 30.11.2021